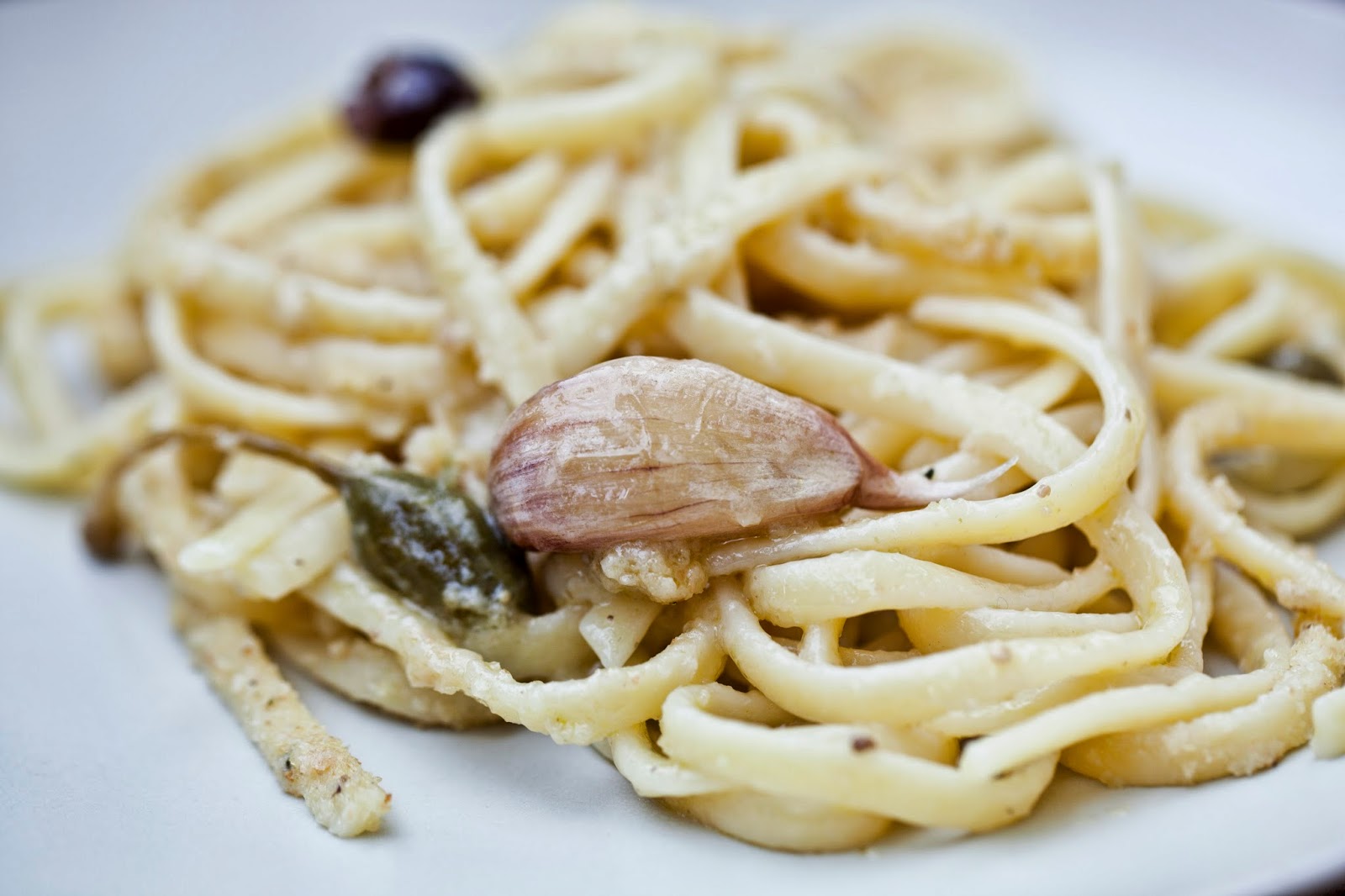 As i mentioned in a previous post, it is a great joy to sit with friends, look at kids running in the garden and mull over the miracle of life repeating itself over and over. Speaking of miracles, there are fruits of the earth which are real miracles of taste, shape, color...
The recipe that follows is a combination of some of the best things that Italy can offer. Simplicity which turns into an amazing concert of flavors. It is actually a bit of a culinary trip across the country: olives Taggiasche from the Riviera Ligure, capers from the deep south of Pantelleria, linguine from Gragnano near Naples, extra virgin olive oil from Tuscany and thyme which is one of the herbs that turns Sardinia  during spring in a overwhelming bouquet of fragrances.
The result is the quintessential of Italian gastronomy: few excellent ingredients, family and friends, smiles and the pleasure to share. 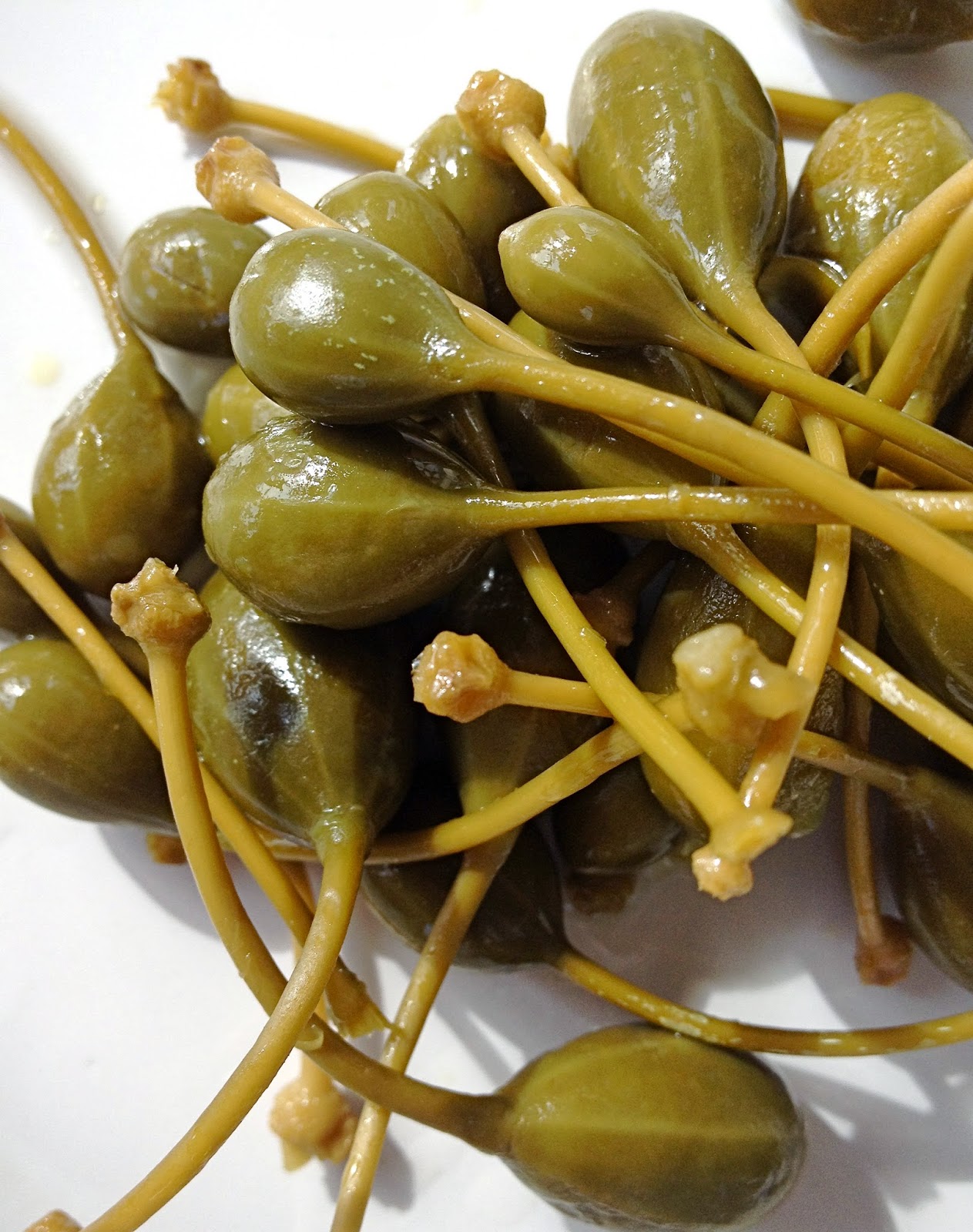 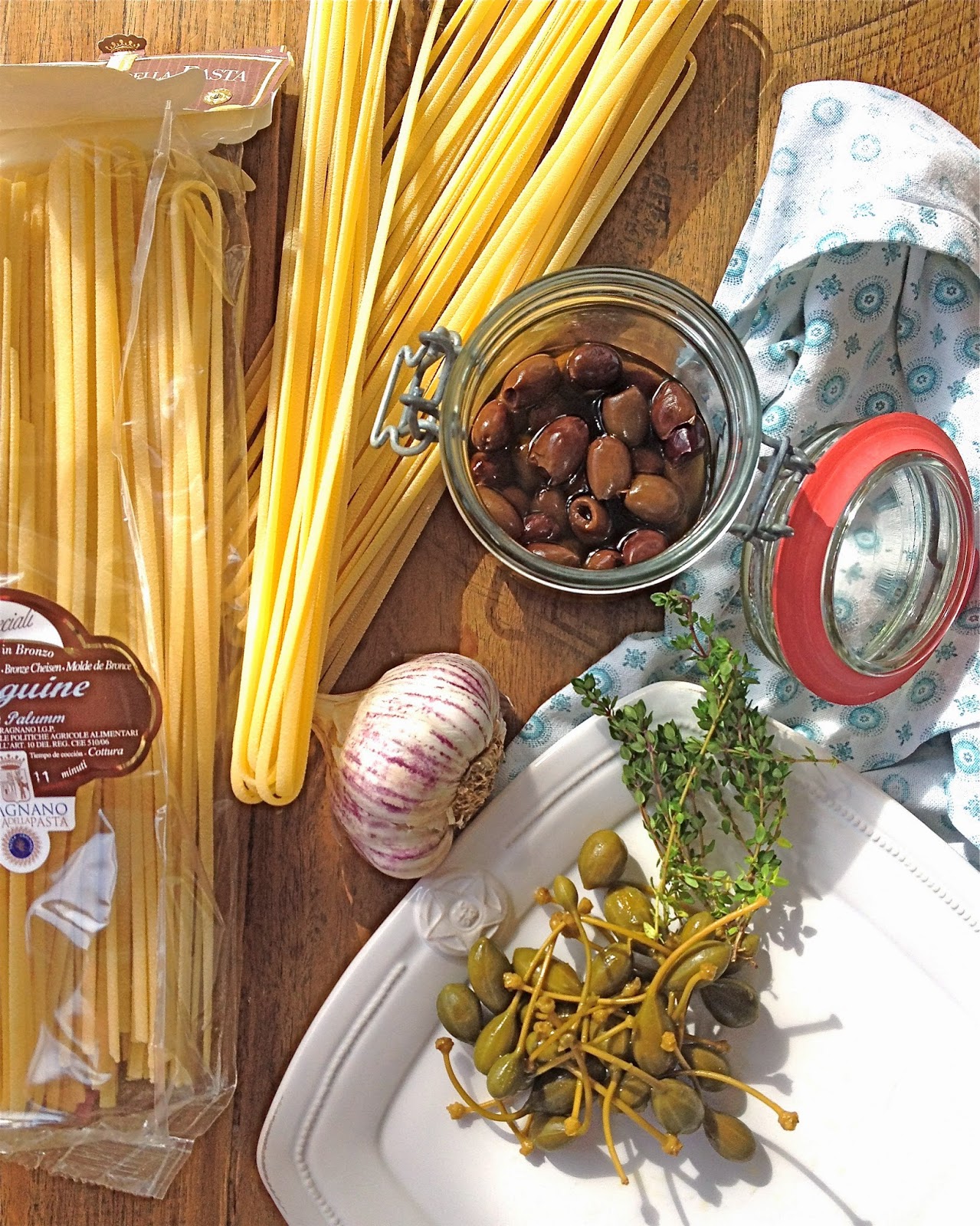 Cut the baguette in dices and put it in a preheated oven (200 degrees). When the bread is tosted with a nice golden color, take the tray out of the oven, let cool for few minutes, then put the croutons in a mixed with the thyme leaves and pulse to create small even breadcrumbs.
In a large casserole bring water to boil, add salt and then shove in the linguine.
In the meantime, in a deep pan (ideally something similar to a wok), bring the oil to heat, add the garlic cloves and when it begins to turn golden incorporate olives and capers. turn down the heat a bit, let simmer for few minutes. When the linguine are halfway their cooking time, using tongs, remove the linguine from the boiling water and add them to the pan where olives and capers are simmering. Add some water where the pasta was cooking (which is now rich of starch), turn the heat up and keep cooking the linguine stirring frequently. The water, mixing up with the oil will create an emulsion which will keep the linguine nice and juicy and will allow them to suck up the flavor of olives and capers.
When the pasta is "al dente" put it in a large bowl and add the breadcrumbs.
Serve immediatly. 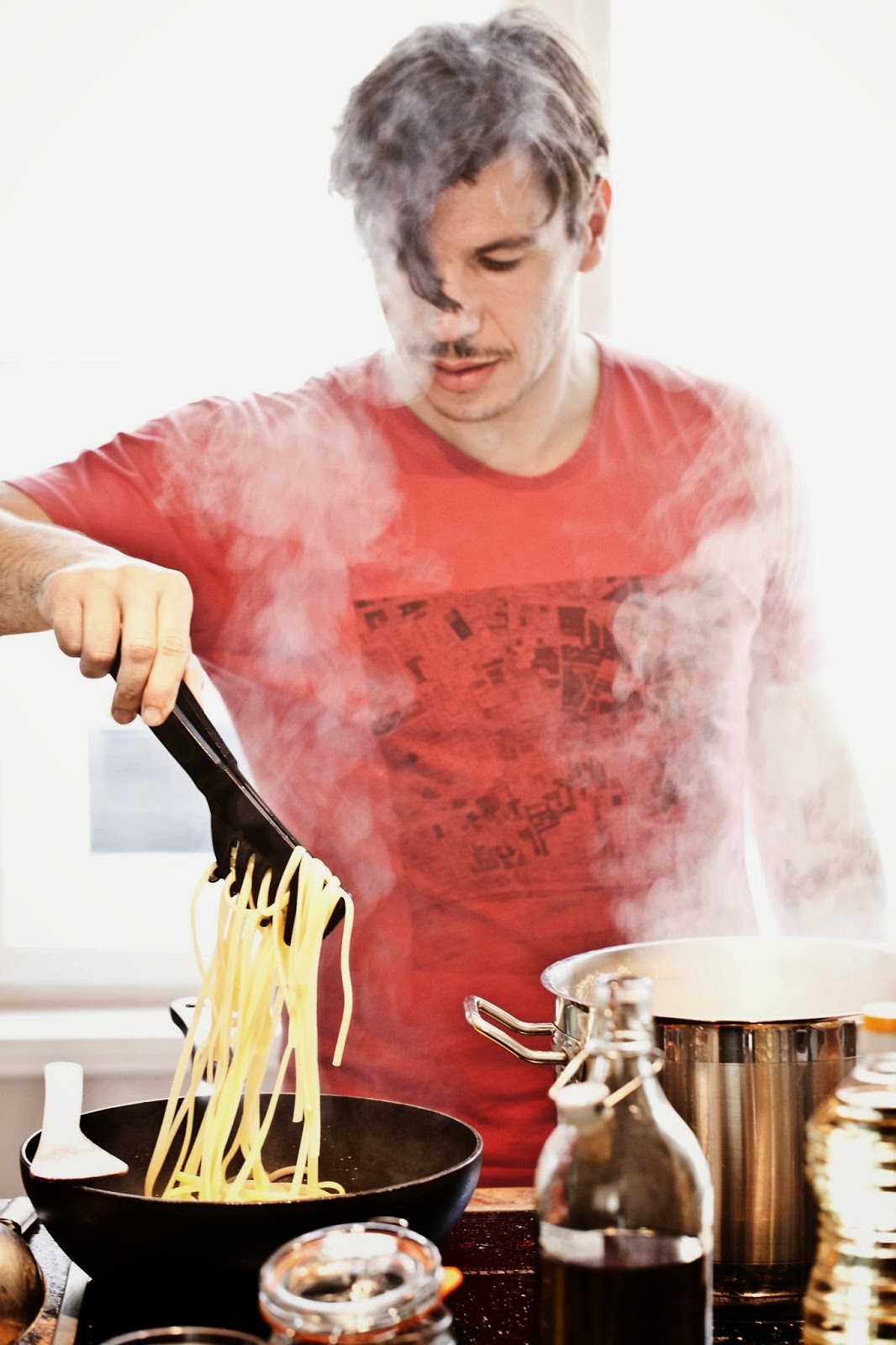 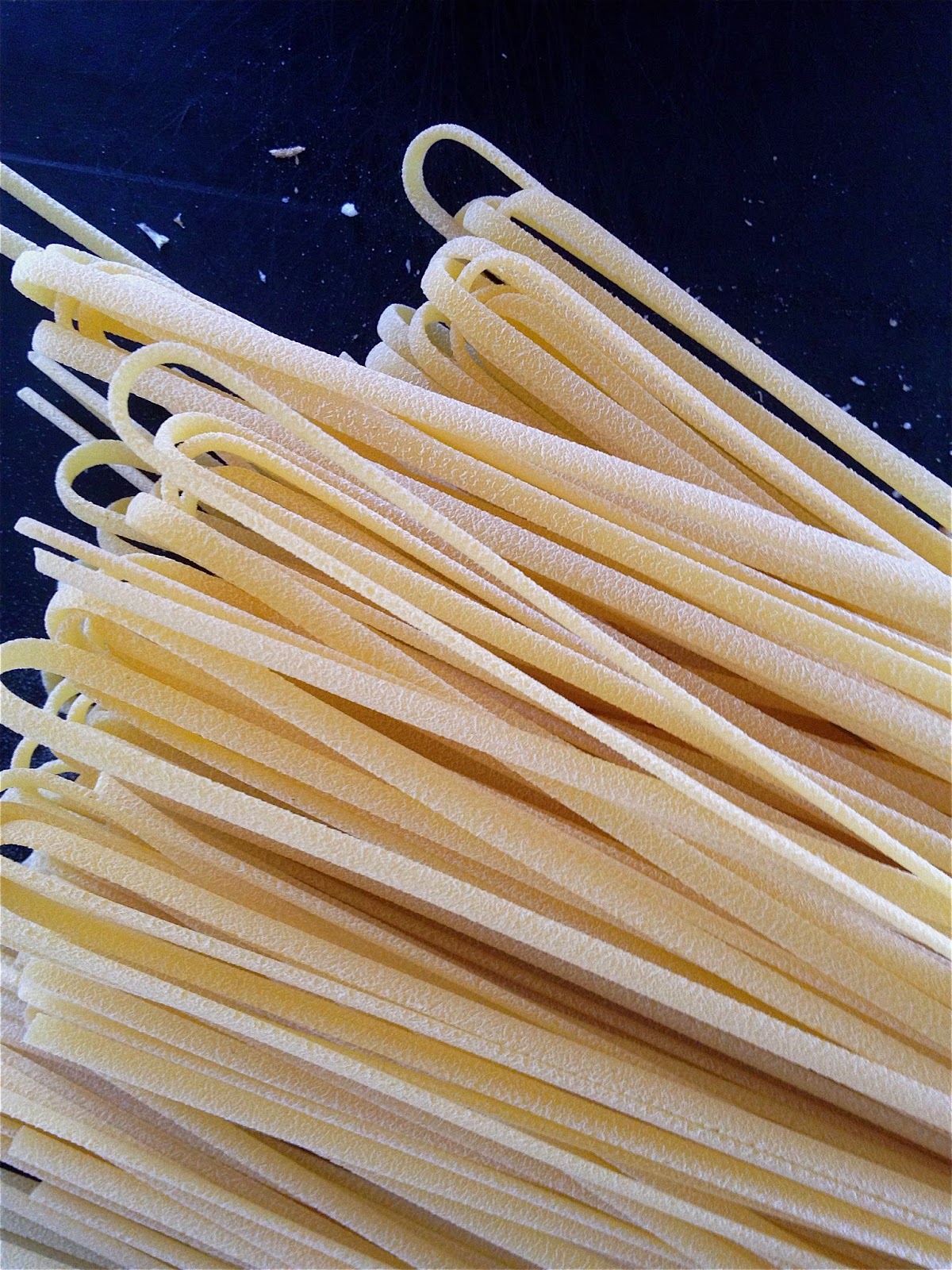 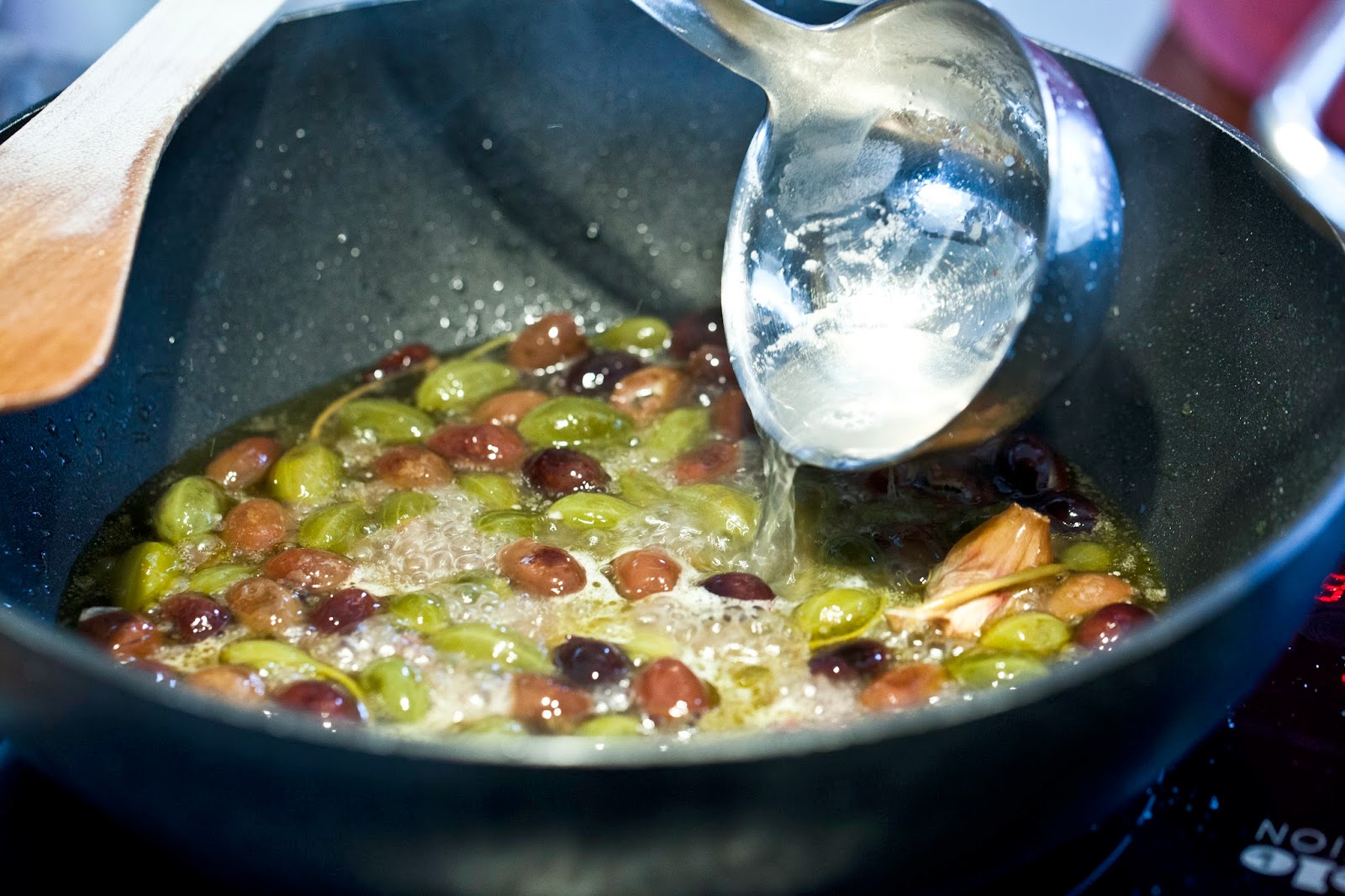 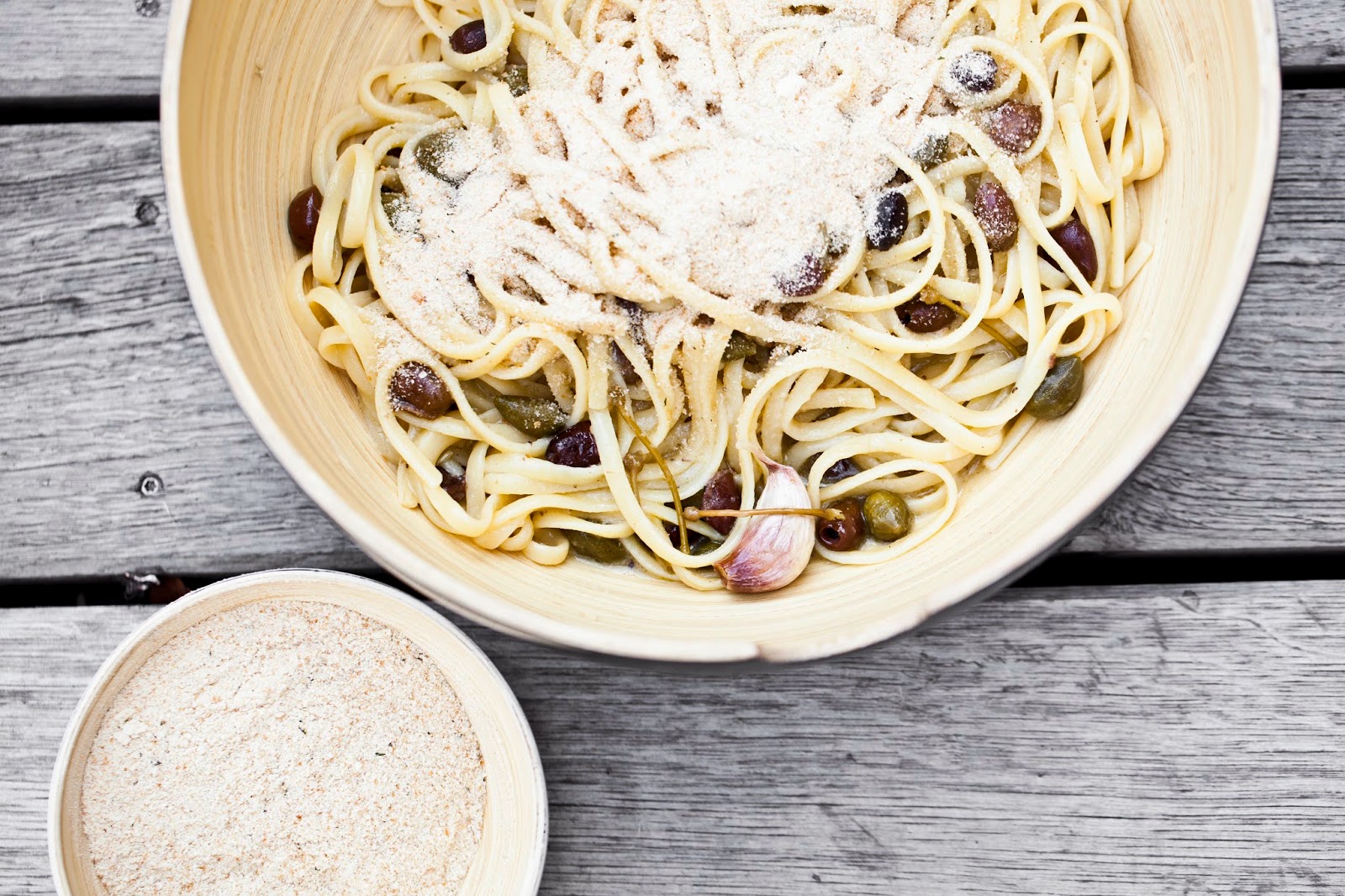 Special thanks to Marketa Pavleye for the beautiful pics
Posted by Gianfranco Coizza at 07:45

Email ThisBlogThis!Share to TwitterShare to FacebookShare to Pinterest
Labels: Recipes

Gianfranco Coizza
The idea of this blog grew along with the growth of the belly of my pregnant girlfriend. To become a father changes point of view and perspective on many things, and obviously on the idea of food too: especially for someone who deals with food and gastronomy professionally, as I do. During the time of the pregnancy I often thought of the food I will prepare one day for my son, of the many things I want to teach him… and I found out that actually there are countless things I need to learn first. So this blog is going to be a quest for a healthier, better, happier lifestyle which I am aiming to achieve for myself and my family and which I am going to share with you. I am going to bring in, just like ingredients: my experiences, my traditions, my creativity and my knowledge. I will mix them up with the same sort of ingredients coming from different people and countries and hopefully we will come up with some amazing recipes of soul food. Gianfranco Coizza